The online editorial and curatorial project for systems, non-objective and reductive artists working in the UK

Generator: Systems, Logic, and the Analogue Art of Programming

A review by Laurence Noga

Sevenoaks is a commuter town with a highly-skilled resident workforce generating high levels of economic activity. Generator responds to that sense of industry, and to the location, through its exploration of rules and systems. This is characterized by a specificity of decision procedures in each of the artists’ approaches. The generative grammar is complex and autonomous, focusing on colour, pattern and movement. The syntactical elements slow us down and control our reactions, allowing technology to transform phenomenology.

Goodbye Ploy 2, by Patrick Morrissey, at first sight appears casual; loose wires spread across the floor from the retro grey casing. Hidden variables seem to exist within the video; for example, the programming of the pattern and colour is subtle and fluid. Diffuse pink and turquoise move in slow motion under small, imperfect, deep-red geometric shapes. There is a strength and clarity in this work, as we are drawn into its parameters through its flickering structure. 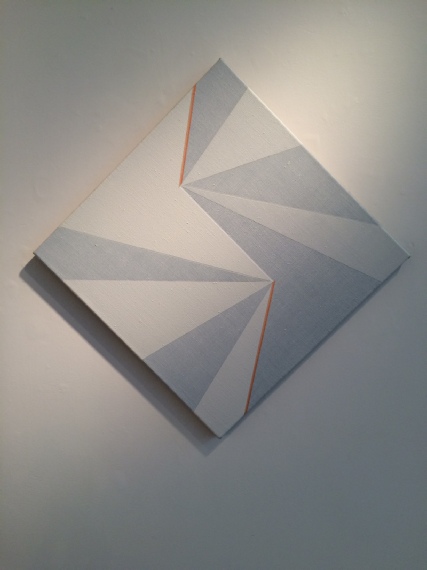 This has a reflexive approach; the rotation of the tones (which are set up in the order stated in the title) is combined with thin layers of paint, and the resulting symmetry creates an ‘Industrialization of memory’. This perception is developed by the pronounced shadow cast by the diamond, which highlights its temporal spatial appearance. 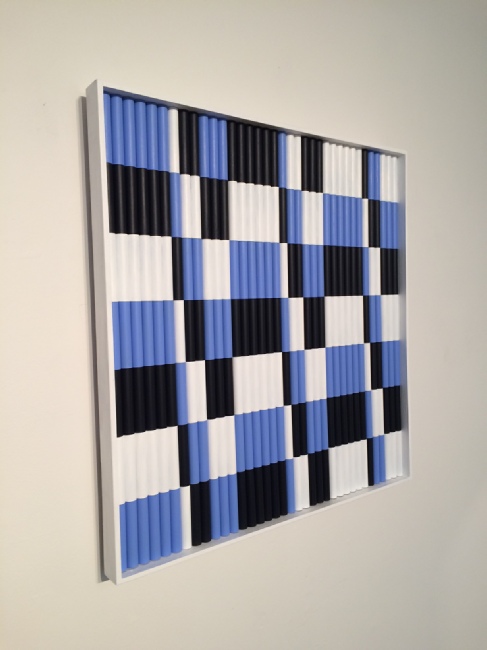 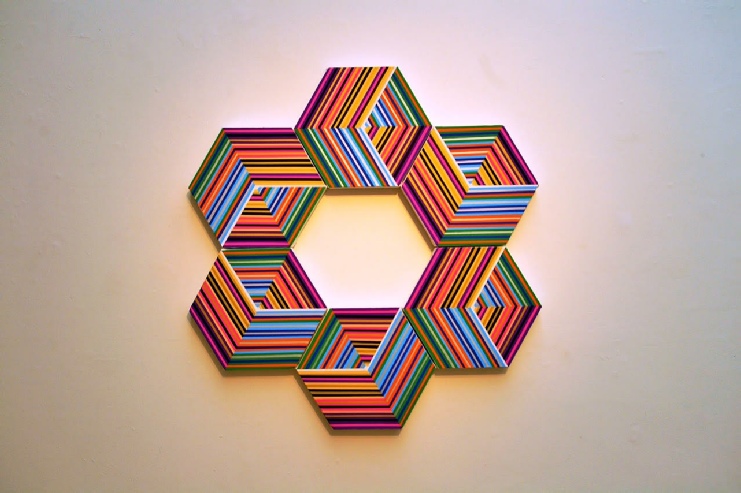 Six Hexagons is an optically constructivist work by Andy Parkinson. The work has a mesmerising zing, created by the interaction of its structural process (constructed from six identical units) and the system of coloured lines that correspond to a predetermined code: (ABACADAEBCBDBECDCEDEABCDE).

It has the calm assurance of an artist like Peter Sedgley the ‘op’ and kinetic artist whose work was influenced by Bridget Riley. The open box space within each hexagon works well in terms of opening up the work, and it fits with Patrick Morrissey’s larger painting Indeterminant, with its uncertainties evoked by the depth in each small square opening of space. 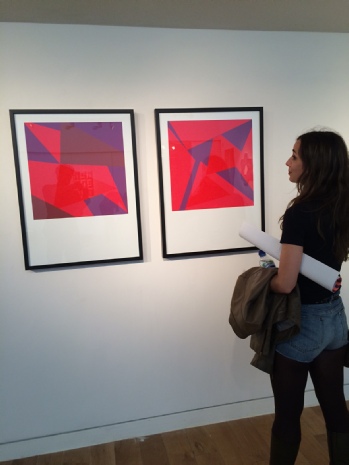 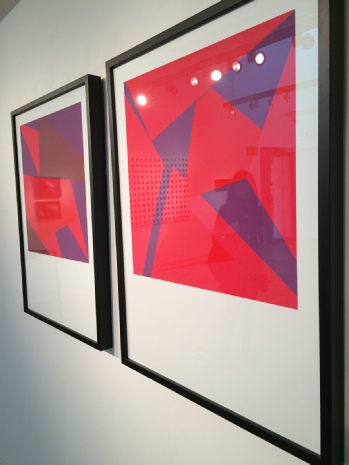 Christina France Equilibrium I & I I Digital print on German etching Open edition, signed on verso

Christina France uses a graphic registration of tone within the use of simultaneous colour contrasts in each of her prints. The boundaries are important; they combine with the plasticity and sudden sharpness of the velvety violet and red, and allow the rest of the work in this space to flow around their simplicity of composition.

Each of Charley Peters’ works has a sense of limitless space (Configuration #30 and Configuration #33). By this I mean that the work feels enormous and expansive, despite the modest size of each panel. I get a sense of cinematic experience, perhaps the work of Kubrick. The illusion and perspective creates a dematerialisation as the work pulls us into an unknown angular drop in space. The touch and authority in the handling of the paint here is key in producing the ambiguity and surface tension.

Mary Yacoob’s Modula Hakar House takes a bird’s-eye view of a seventeenth-century Chinese dwelling. Its microscopic rendering could depict a community in movement. The exquisite detail, in ink and graphite on paper, echoes some of her other architectural drawings, where she creates pathways that map physical space. But here the intimacy creates mystery and doubt.

As each of James Irwin’s crystallized raw silicon forms neatly drops into place in Silicon Binary(ii) we feel caught in some kind of time-trapped movement. The digital animation has an unending cycle, and a manifestation of something slightly uncomfortable happening within one’s peripheral vision.

This is a show to be experienced; the peripheral impact mentioned above is Instrumental to the show’s success. Perhaps, the stacked pile of posters (designed by Muir McNeil) on a pallet is the most significant work in the show, not only because the work is completely compelling as an object, with its allure and promise of something dazzling and programmatic, but also because it activates, and defines, a generative function within a function. 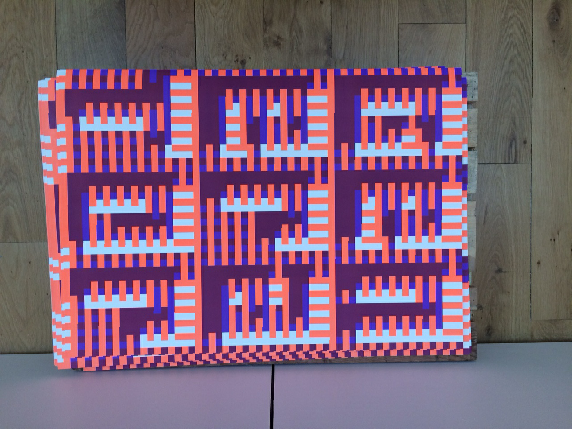 Poster by Muir McNeill, on reverse: text by Laura Davidson , edition of 400

Hanz Hancock’s tubular structures develop further the link between current constructionist approaches and the British Systems Group. His work quietly extends that logic in a highly playful manner, allowing sensation and its transmission to flourish. The work of Peter Lowe connects in works such as ‘Untitled’ (permutation on seven). Lowe’s geometric reliefs pointed the way for a generation of constructivist artists. This ‘super lattice’ (semi-conducting materials, in Physics) has a methodology that pulls us into its production and currency of signification. 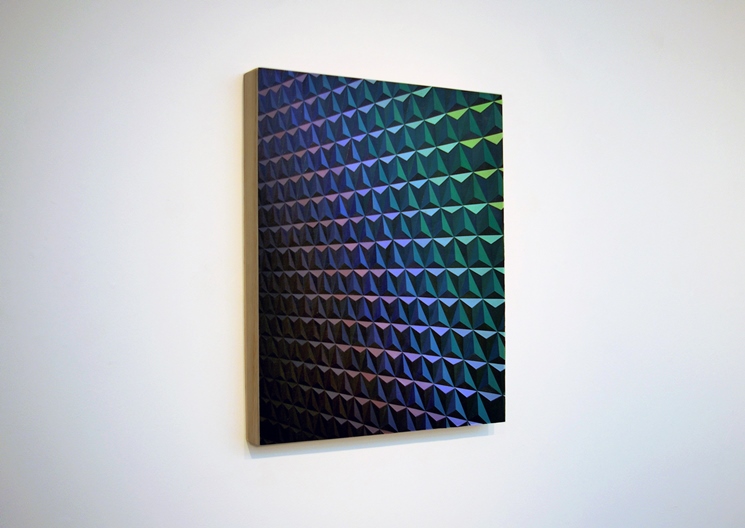